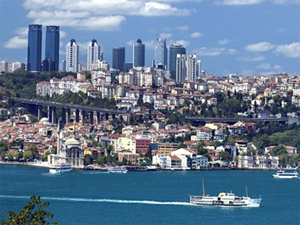 The Turkish real estate sector, offering ever-greater opportunities for investors every year, has come to prominence especially in the last decade. Although with the recent economic crisis and the global economic recession the European and US real estate markets have been negatively affected, the real estate market in Turkey is still promising. While the reduction in demand and a downward trend in house prices have been observed all over Europe, the number of apartment units sold in Turkey increased by 18 percent in the second quarter of 2011 compared with the same period of 2010 according to TurkStat statistics, which shows that the country has huge growth potential in the real estate sector.

The entry of global actors into the real estate market is increasing the competitiveness of the sector, while massive mergers and acquisitions taking place help its expansion and overall growth rates. Different surveys and publications such as the "Emerging Trends in Real Estate Europe", prepared jointly by PricewaterhouseCoopers (PWC) and the Urban Land Institute, show how global and local interest in the Turkish real estate sector has increased. According to the 2011 publication of the report, Istanbul is ranked as the most attractive investment market in Europe for both new acquisitions and development, and the second most attractive market for existing investments, following Munich. Meanwhile, Turkey ranks as the 3rd most attractive real estate investment destination among the emerging countries in 2012, according to a survey conducted by the Association of Foreign Investors in Real Estate (AFIRE).

As Turkey progresses along the road to EU membership, the essential legislative reforms introduced have made investing in the real estate market even easier and more profitable. The amendments to the Land Registry Law, the Mortgage Law, and the redrafting of tax laws are also designed to improve the competitiveness of the Turkish real estate sector.

The real estate sector in Turkey also has great prospects thanks to demographic factors that are changing in parallel with improving economic figures. The demand for offices, logistical and industrial areas is expected to increase in line with the increasing number of global and local companies.